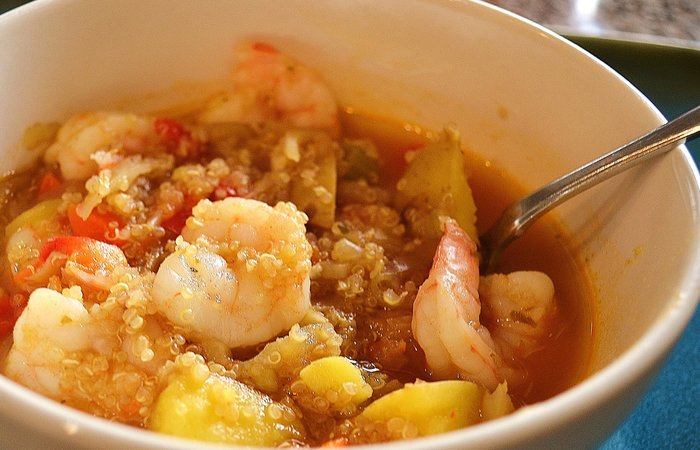 I came across this traditional Peruvian soup surfing the net when I had some quinoa and shrimp that I wanted to make into a tasty soup. Little did I know that quinoa vegetable soup is very popular in Peru (it is served every day!). I have modified the vegetarian soup to include shrimp, for a bit more protein.

Quinoa is the grain of the Incas and has been cultivated in the Andean highlands of South America for over 7000 years. It was one of the most sacred foods of the ancient Incas, a plant so nourishing, delicious and vital, they called it chesiya mama; the ‘mother grain’.

*I have used cilantro as a condiment (because I really, really, really like it!), but it is traditionally served with fresh parsley.

If you are making this vegetarian, substitute the chicken stock with vegetable stock and eliminate the shrimp. I’d love to see what this would taste like with chicken instead of shrimp. Drop me a comment if you modify it this way.

Nutritionally, quinoa might be considered a super grain--although it is not really a grain, but the seed of a leafy plant that's distantly related to spinach. Quinoa has excellent reserves of protein and unlike other grains, is not missing the amino acid lysine, so the protein is more complete (a trait it shares with other "non-true" grains such as buckwheat and amaranth). Quinoa offers more iron than other grains and contains high levels of potassium and riboflavin, as well as other B vitamins: B6, niacin, and thiamin. It is also a good source of magnesium, zinc, copper, and manganese, and has some folate (folic acid).

Both my daughters are not huge fans of quinoa, but when it is assimilated into a tasty soup or stew, they never seem to mind and usually don’t realize it is in there. Sneaky? Of course, but at least they are getting the nutritional benefits!