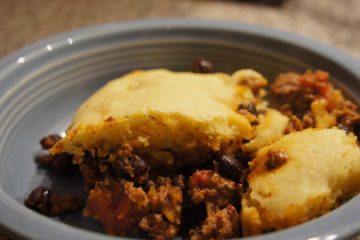 Serve with a mixed green salad with balsamic vinaigrette-

Although tamale pie has its origins in the United States, most likely California, many American Hispanics prepare this ultimate comfort food. Not to be confused with Mexican tamales, tamale pie is a baked casserole of ground beef, cornmeal, tomatoes, olives and cheese. I simplified the original recipe, which calls for preparing cornmeal and pouring it into the bottom of a pie dish and again topping the beef mixture with more cornmeal, by substituting a corn muffin mix. A simple side salad completes this family-friendly meal. 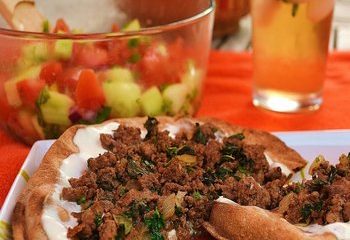 I was flipping through a Cooking Light magazine and came across Beef Kefta Patties with Cucumber Salad. Kefta? A quick internet search yielded my answer: Kefta is the Lebanese/Syrian dialect for Kofta- a Middle Eastern, South Asian and Balkan meatball or meatloaf, although it is also referred to as kefka in Morocco. In the Middle East Kefta is ground beef or lamb, typically mixed with cumin, paprika, minced onion, coriander and parsley. Cinnamon, hot ground pepper, and mint leaves are optional.

The recipe below shows traditional quantities of these spices and herbs. I have, however, sautéed the kefta mixture in favor of forming into kebobs and made it as the base for a flatbread pizza. In honor of its Lebanese roots, serve it with a cooling cucumber-tomato salad. 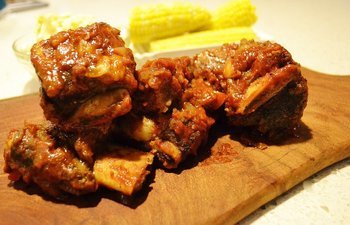 Do you have a craving for BBQ ribs, but no time to precook them, bake them, and then grill them? No problem, as this slow cooker does it all for you. It’s finger-licking, fall-off-the-bone good and pairs perfectly with cornbread, coleslaw and an ice cold beer (fresh lemonade for the kids). 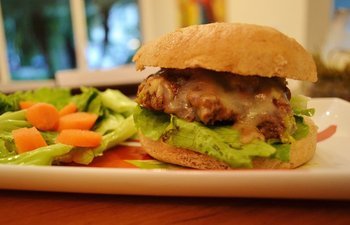 Serve with crudites and ranch dip-

I thought it would be interesting to modify a classic meatloaf to a handheld version AND have my slow cooker do all the work. Tastes just like a cheesy meatloaf; mission accomplished! 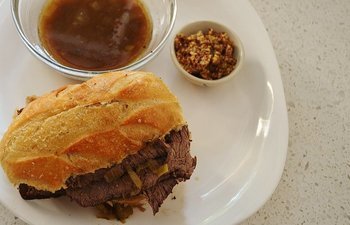 If you happen to be in Los Angeles you must make a stop into Phillipe the Original in Chinatown for the best French dipped sandwiches. While all their versions are pretty yummy (lamb, roast pork, turkey or ham) it’s their classic roast beef French dip that is iconic LA food and I had to recreate the sandwich at home for when the craving just needs to be satisfied. This is the restaurant’s classic recipe adapted for the slow cooker. Much cheaper than a plane ticket! 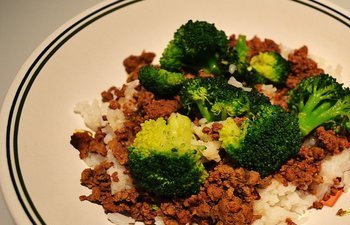 A bit of a twist on a popular Chinese dish, which is typically made with sirloin strips, this slow cooker version uses more economical and fuss-free lean ground beef. This is a staple for my family on Tuesday piano practice night when we come in late and need dinner in a hurry. I prepare my rice in a rice cooker just before we leave and keep it on warm for our return.

Being transplanted to Tampa over 20 years ago has opened my eyes to the culinary wonders of Cuban food: black beans and rice, Cuban sandwiches, arroz con pollo (chicken and rice), café con leche, and this dish, Picadillo. Tampa’s Cuban community originated in the late 1800s in what is now Ybor City, named after its founder, Vicente Martinez Ybor, and continues to be a huge cultural and culinary influence on the City of Tampa.

I found this history of picadillo from Tampa’s Junior League, a philanthropic and social organization that, among other things, is famous for its locally-based cookbooks, which have graced Tampa kitchen counters since 1961: The name comes from the Spanish word “picar,” meaning “to chop” or “to mince,” and it seems that many Latin American countries have their own twist on the basic ground beef recipe. In Mexico, it’s sweetened with honey, giving it a teriyaki-like taste. In Puerto Rico, it is used as the filling for empanadas and can include cheese, ham and rum-soaked raisins. In the Dominican Republic, picadillo can include hard-boiled egg and a bouillon cube. The Cuban version is a balance of sweet-salty due to the pimento-stuffed olives, capers, vinegar and raisins. 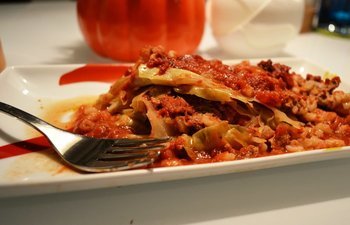 This is a super easy version of stuffed cabbage as there is no stuffing and rolling; only layering! The taste that we love about stuffed cabbage rolls, however, stays the same. 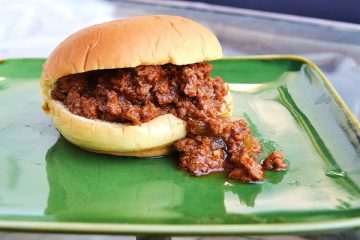 This is very kid-pleasing and easy to throw together. I like to serve it with a green salad or crudités. It’s a bit sweeter than a typical Sloppy Joe recipe, but a nice change from feeling like you are eating spaghetti on a bun. 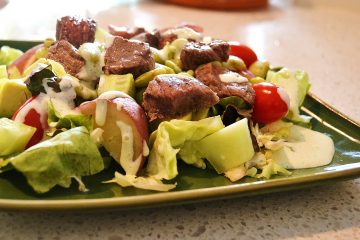 A little protein, a little starch, and a lot of fresh vegetables are my idea of the perfectly balanced whole foods meal. Top it with a creamy homemade ranch dressing and this is a dinner salad sure to please everyone.