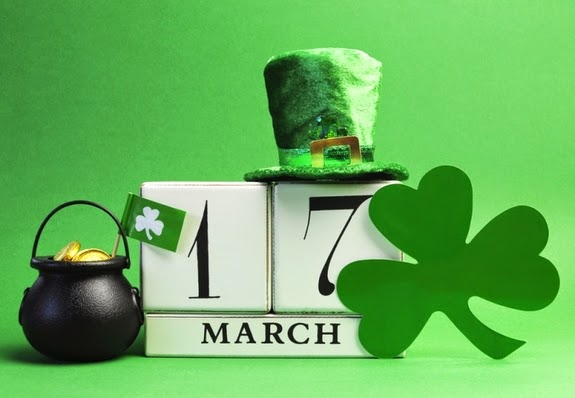 I popped into Trader Joe’s to buy my corned beef for St. Patrick’s Day even though I have not one ounce of Irish green in my blood.  The cashier, however, reminded me that on March 17th “Everyone is Irish!”.

With that so-true sentiment, I thought I would write a little of what exactly IS St. Patrick’s Day?  Why green beer, rivers of green, and entire cities shutting down to celebrate.

St. Patrick, or the “Apostle of Ireland,” actually started out in the pagan religion. While not much is known about his early life, as many of his life’s details were lost to folklore, letters from St. Patrick reveal that he was captured in Wales, Scotland, or another close area outside of Ireland and taken to Ireland as a slave. Years later, he escaped and returned to his family, who were Romans living in Britain (he is not even Irish!), going back to Ireland for mission work after finding a place as a cleric and then Bishop within the Christian faith. He was born around 460, and by the 600s, he was already known as the Patron Saint of Ireland.

His religious feast day is celebrated on March 17th, the day he died in the 5th century.  The Irish have observed this day as a religious holiday for over 1,000 years. St. Patrick’s Day falls during the Christian season of Lent, when Irish families would attend mass in the morning and celebrate in the afternoon. Abstinence from drinking during Lent was required of many Catholics, but they were allowed to break the fast during St. Patrick’s Day; hence, one cause for the day’s association with drinking heavily. Breaking Lent’s fast on meat and dancing, likewise, resulted in feasting on Irish bacon and meats and cabbage and festivities revolved around dancing.


When was St. Patrick’s Day First Celebrated in the U.S.?

St. Patrick’s Day was first celebrated in America in 1737, organized by the Charitable Irish Society of Boston, including a feast and religious service. This first celebration of the holiday in the colonies was largely to honor and celebrate the Irish culture that so many colonists had been separated from.

Why are the Irish Associated with the Color Green?

The holiday was originally associated with the color blue. It’s thought that the shift to green happened because of Ireland’s nickname “The Emerald Isle,” the green in the Irish flag and the shamrock, or clover.  Green ribbons and shamrocks were worn as early as the 17th century. During the Irish Rebellion of 1798, an uprising against British rule in Ireland, Irish soldiers wore full green uniforms on March 17 to make a political statement.

There is also a political association here in the U.S.  Most first Irish immigrants to the U.S. were largely Protestant but as the Great Potato Famine hit Ireland in 1845, close to 1 million poor and uneducated Irish Catholics began pouring into America to escape starvation. The Protestant Irish initially shunned them but when they realized the Irish, both Protestant and Catholic, represented a large voting block, they organized themmselves and were commonly referred to as the “green machine”, an important swing vote for political hopefuls.

Why are Rivers in Many Cities Dyed Green?

The practice started in 1962, when city pollution-control workers used dyes to trace illegal sewage discharges and realized that the green dye might provide a unique way to celebrate the holiday. That year, they released 100 pounds of green vegetable dye into the river–enough to keep it green for a week! Today, in order to minimize environmental damage, only 40 pounds of dye are used, and the river turns green for only several hours.

Why is the Shamrock Associated with the Irish?

The symbol of the shamrock, which is the symbol of Ireland, is used for St. Patrick’s Day as it comes from the story of St. Patrick using the shamrock to illustrate the Holy Trinity. The three-leafed plant coincided with the Pagan religion’s sanctity of the number three and also contribute to the root of the green color theme.

No St. Patrick’s Day is complete without traditional Irish foods.  The History Channel’s vast collection of articles and videos on St. Patrick’s Day also included a link to classic Irish recipes.  The Whole Meal also has a slow cooker version of Corned Beef and Cabbage (why I was in Trader Joe’s as this is what I make!), as well as a recipe for Irish Stew and Colcannon, Ireland’s most popular potato recipe.

So now that you know all about this popular holiday celebrated all over the world, don your best green, cook up some great Irish food, maybe drink a green beer and attend your local St. Pat’s Day festivities.