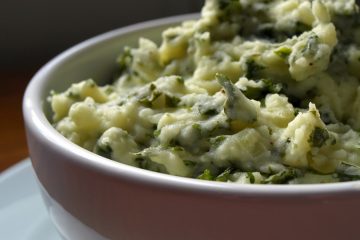 Colcannon is Ireland’s best known Irish potato dish and each region has its own variations. Some areas prefer kale, while others add in cabbage or even parsnips. Onions or scallions are sometimes featured (although most would call this champ, another Irish potato dish).
Darina Allen, the Julia Childs of Ireland, says that kale is most traditional. Her book, Irish Traditional Cooking, is one of the most definitive cookbooks on Irish cooking and a “must have” on every cookbook lover’s shelf. She writes in it, “A common folk custom was to offer a bowl of champ to the fairies at Hallowe’en. This would be left on field posts or under trees, such as hawthorns or whitethorns, which where particularly associated with fairies.”
My version stays true to the kale, but I have added in some chopped green onion for a bit more flavor. Feel free to substitute cabbage for the kale and eliminate the onions.