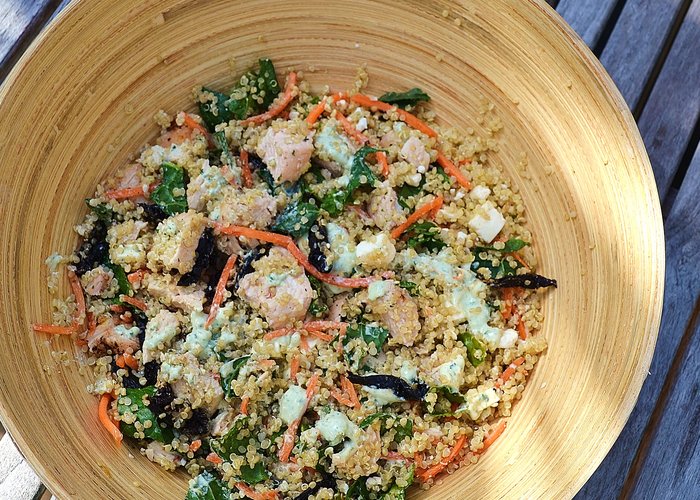 Chicken and Kale Quinoa Bowl
One of my favorite meals to order at our local First Watch lunch spot is the Pesto Chicken Quinoa Bowl. It is so crave worthy I knew I had to figure out how to make it at home so I invited good friend and TWM tester, Megan Weathers, over to help me recreate this nutritionally powerhouse one-bowl meal. I think I nailed it and I even have an equally amazing vegan version in the Suggestions (thanks to adapting for vegan-eating Megan).
Ingredients
Instructions
Recipe Notes

* Before cooking, the seeds must be rinsed to remove their bitter resin-like coating, which is called saponin. Placing quinoa in a strainer and rinsing thoroughly with water easily washes the saponin from the seeds.

**If you would like to make your own pesto, here is an easy recipe that is more economical as it uses walnuts instead of pricey pine nuts:

I made my pesto vegan for Megan by leaving out the parmesan cheese; it tasted just as yummy and we did not miss the cheese at all. This way I could make a vegan version of the quinoa bowl: combine ½ -1 tablespoons of the vegan pesto with 3 tablespoons of an Italian or balsamic vinaigrette in place of the yogurt pesto dressing. Eliminate the chicken and feta cheese; gently toss the pesto vinaigrette with the remaining ingredients. It was a huge hit!

Quinoa is the grain of the Incas and has been cultivated in the Andean highlands of South America for over 7000 years. It was one of the most sacred foods of the ancient Incas, a plant so nourishing, delicious and vital, they called it chesiya mama; the ‘mother grain’.

Nutritionally, quinoa might be considered a super grain--although it is not really a grain, but the seed of a leafy plant that's distantly related to spinach. Quinoa has excellent reserves of protein and unlike other grains, is not missing the amino acid lysine, so the protein is more complete (a trait it shares with other "non-true" grains such as buckwheat and amaranth). Quinoa offers more iron than other grains and contains high levels of potassium and riboflavin, as well as other B vitamins: B6, niacin, and thiamin. It is also a good source of magnesium, zinc, copper, and manganese, and has some folate (folic acid).