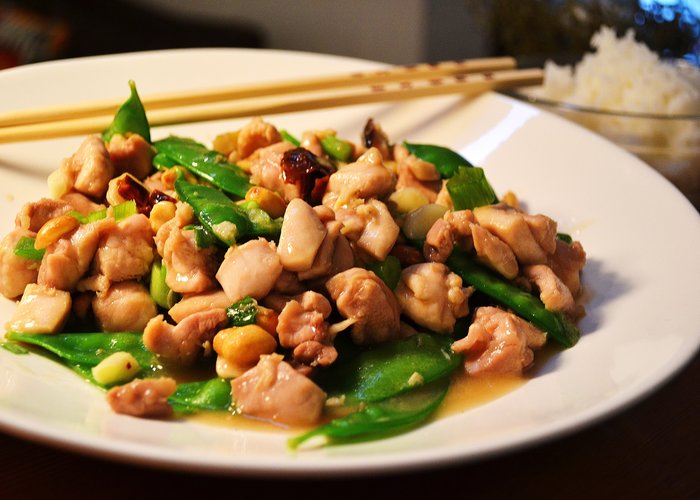 Kung Pao Chicken
Serve with cooked Jasmine rice- A Cooking Light recipe of Kung Pao Chicken was my original trigger to want to test an at-home version of the popular Chinese dish found at all US Chinese restaurants. When I looked at the CL version’s ingredients something seemed amiss (namely I doubted that red pepper flakes could recreate an authentic recreation) so I immediately went to Bee Yinn Lo’s website, Rasa Malaysia, my favorite Asian recipe site. I am glad I did, as I learned that Kung Pao is actually an authentic Chinese dish (and not a made-for-American-tastes recipe) and this is the authentic version. I have followed her recipe as closely as possible, although I did not have a couple ingredients (but I used close substitutions), scaled the heat back a bit (just enough so my 10 year old would eat it) and the result is authentic, fresh and a keeper that I would like to regularly make when Chinese food cravings strike or for friends at a Chinese takeout-themed dinner party perhaps.
Ingredients
Instructions
Recipe Notes

*Kung Pao originally calls for Shaoxing wine, but I substituted rice wine. A more common ingredient you may have is dry sherry (not to be confused with cooking sherry which is too salty). I have also read you can mix white grape juice with either rice or white vinegar for a similar substitution.

**I did not have dark soy sauce (which is used in Kung Pao Chicken to darken the chicken) so I eliminated this ingredient. My version does not have the typical caramel color of the dish but it did not compromise the flavor.

***This was an important ingredient that I did not have, but I used Worcheshire sauce in its place, as suggested in the Raya Malaysia recipe or you can use balsamic vinegar, as essentially black vinegar is the balsamic of China.

I scaled down the heat but if you seek a spicier version, add more dried chile peppers (up to 7-10 for really spicy!)

Majority of the time (25-30 minutes) in this recipe is invested in prep, which is typical for many Chinese stir fries. It is important to have all this done, as once you start cooking, the recipe is done in 5-7 minutes.

I have added snow peas to my version so I did not have to cook a separate vegetable side dish, but the authentic Kung Pao Chicken does not include any vegetables. Feel free to add in snow peas or even sweet bell pepper and carrots (this would be Americanized versions found at most US Chinese restaurants) or take out the snow peas.
You can make this with shrimp, scallops, tofu cubes or all veggies (think carrots, celery, water chestnuts, snow peas, red peppers) for a change from the predictable chicken.

Here in an excerpt from the Rasa Malaysia recipe on the origin of Kung Pao Chicken: “Kung Pao is a cooking technique originated from the Sichuan province of China; the authentic Sichuan Kung Pao Chicken (????) or Gong Bao Ji Ding calls for the staple Sichuan peppercorn for the numbing flavor, however, the version popular outside of Sichuan has since been adapted to many regional variations. For examples: in Malaysia, Kung Pao chicken is served without peanuts, but sometimes cashew nuts are used; in Thailand, fish sauce and sweet soy sauce are used to flavor a similar dish. “She also states that vinegar is the key ingredient in this dish, so do not skip it!