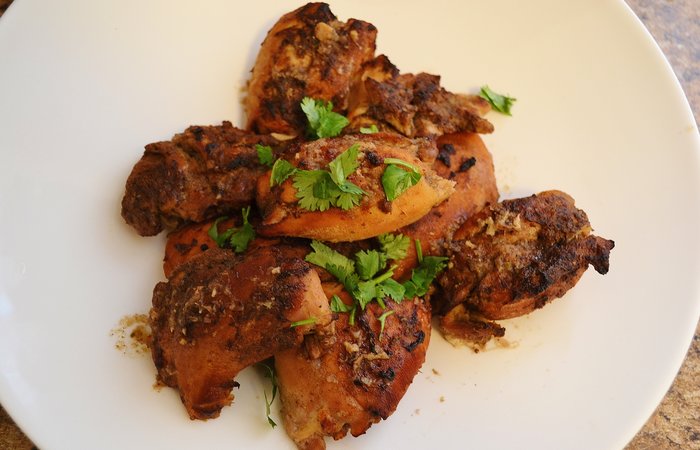 My friend and yoga instructor, Le Shan B., was looking for an authentic jerk recipe she could make with her new slow cooker. My first attempt at this Caribbean favorite was a no-go and I was glad to have a second go at it. Looks like second time around is the charm. This is a keeper for all of you craving spicy Jamaican food made easy. Recipe for rice and peas is in the Suggestions. An icy cold Red Stripe to wash it down is not a must but highly recommended. Yeah Mon!

* Keep it true jerk chicken and use bone-in skin on chicken thighs. If you use this option increase cook time to 4-5 hours on LOW or 3-4 on HIGH.

** I used one Habanero and it was the perfect heat but if you like a lot of heat throw in 2 or more. The slow cooker, unlike a grill, mellows the pepper's heat quite a bit.

A scotch bonnet pepper is the hot pepper of choice in the Caribbean. Unlike it's similar-in-heat-index cousin, the Habanero, it has a hint of sweetness that lends itself perfectly to the spices typically found in caribbean food- allspice, ginger, nutmeg and cinnamon. Use a Scotch Bonnet but a Habanero was fine too.

Try not to touch the jerk blend with your hands because it's extremely hot. Try using gloves or just place the chicken pieces and marinate directly from the bag in the slow cooker.

The flavors of jerk are more pronounced when your throw the pieces with a drizzle of the marinade under the broiler. It also crisps the chicken which will get the chicken to as close to what a grill would do. Try not to skip this step.

For true jerk chicken don't make it in a slow cooker and grill the marinated chicken pieces making sure to bast occasionally with the reserved marinade.

Here is an easy recipe for Jamaican rice and peas, a classic side dish to jerk:

In a medium saucepan, combine rice, coconut milk, water, beans, thyme, and lime zest. Set pan over high heat and bring to a simmer. Reduce heat to low, cover and simmer 20 minutes, until liquid is absorbed and rice is fluffy. Fold in scallions and season to taste with salt and pepper.